The Putting STEAM into Policy open event was organised on Wednesday 21st of April, as part of the STEAM Innovation and Curriculum project. The session was held online and followed a discussion format with experts from leading policy, science and arts organisations around Europe.

The first part of the session consisted of presentations by Stephen Bennett, Mikael Sokero, Ralph Dum and Peter Purg. Each of them presented cases to inspire and open a debate on how transdisciplinary approaches such as STEAM can be meaningfully embedded in institutions.

Is there a role for art in policy? With this question Stephen Bennett discussed two projects, “Disability-free life expectancy – Health inequality in UK” and “The future of an aging population“ in which he had been involved. While the projects had different goals, in both cases art and design methods were used to open a debate and trigger public reflection. The first case highlighted the production of an artistic installation with Nesta to visualize and communicate complex information about health inequalities in the UK. In the second case, Stephen showcased a set of future scenarios produced by Strange Telemetry, which were used in speculative design workshops as discussion prompts with stakeholders. The workshops were part of a foresight project at the UK Policy Lab for co-creating policy ideas around opportunities and challenges on population aging. Building on these two project experiences, Stephen introduced a framework for thinking about the links between art and policy. From his perspective, a transdisciplinary approach that acknowledges the value of art and design can contribute to developing policy in a more open, data-driven, digital and user-centred way.

The second talk, given by Mikael Sokero, also focused on governance. Mikael challenged attendants to think about transformative governance, sharing insights based on his experiences at Demos Helsinki. In his presentation, he argued why transdisciplinarity is needed and how governments could benefit from it. Mikael defined transdisciplinarity as the “co-production and use of knowledge inclusive to different sorts of knowledge and knowing”. From his view, transdisciplinarity in governance is a way to generate new fit-for-purpose approaches, co-create paths for innovation and co-produce radical innovations that contribute to address contemporary challenges. He presented projects in which the Finnish think tank had been involved to highlight key issues around knowledge brokerage and experimentation in policy making.

Ralph Dum discussed policy in the context of innovation. He presented STARTS, a European innovation program at the nexus of Science, Technology and the Arts. He introduced STARTS pillars: research, innovation and education, highlighting various initiatives that link to them. For instance, in the field of research the STARTS Lighthouse pilots and the STARTS residencies support artistic contributions and explorations around novel technology solutions. Mindspaces and Re-fream are two thematic pilots that connect artists and designers with scientists to envision solutions for the fashion industry and urban living, respectively. The STARTS Prize is perhaps the most well-known STARTS initiative to foster transdisciplinary innovations. In his presentation, Ralph referred to recent STARTS Prize awarded projects such as the Rock Print, the Anatomy of an AI system and Alias to exemplify innovative collaborations between industry, technology and the arts. In education, programs like the STARTS Talks and the STARTS Academy are contributing to bridging the gap between art and technology at all education levels.

Peter Purg elaborated on Ralph’s reflections on education and presented the Master in Art Science and Technology project (MAST) project. The project focuses on the development of an educational module in which interdisciplinarity is an intrinsic part of curriculum innovation.  Thus, the MAST module explores the intersections of Art, Science and Technology, combining methodologies and practice from academia with the cultural and creative sector to propose a model for interdisciplinary and collaborative entrepreneurship and cultural management. This international study module has been developed by a consortium formed by 15 European institutions active in the sci-art-tech triangle. At the end of his talk, Peter shared the MAST Manual, which summarises the knowledge and insights gained through the project.

After the presentations, the second part of the event consisted of group discussions on  how STEAM methods can support policy in Higher Education. During this part, participants discussed the relationships between policy and funding, as well as the impact of certain ways of framing the arts through the language used. In this context, building a culture that values arts requires considering aspects related to the brokerage of knowledge and modes of inquiry, moving away from visions that reduce value to economic growth. Communication and public engagement with policy and decision makers were regarded as steps that could  help advance this.

Further information on speakers at the ‘Putting STEAM into Policy’ event

Stephen Bennett explores the intersection of art, science and policy. Stephen’s work plays with geography and scale, making the link between everyday actions and global phenomena like climate change and migration. Stephen holds a number of roles: he is co-Head of the UK’s Policy Lab, Fellow of the Royal Society of the Arts, an Industry Champion for Nesta and a Clore 16 Fellow. Stephen’s artistic work has been exhibited at art galleries, as well as universities and museums. He has published articles in Nature, the SciArt Magazine and Inter Alia.

Mikael Sokero works in the Governance Innovation team at Demos Helsinki. In his work, he supports governments around the world in reimagining and reinventing governance for the future world. This entails new ways to engage with people, transforming global challenges into long-term policy missions, measurable experiments and capacity building. Mikael believes that bringing these changes into the core of public governance enables the translation of our collective visions about the world of tomorrow into reality.

Ralph Dum is senior expert at the European Commission (EC). He holds a PHD (1992) in physics. He worked on ultra-cold atoms, quantum optics/computing at various institutions in the US, UK and France. After joining the EC, he has been in charge of developing research programmes – including on quantum computing, complex systems research and global systems science. He has also initiated the STARTS programme, which aims to foster innovation at the nexus of Science, Technology, and the ARTS.

Peter Purg’s activity spans across the fields of media art and digital culture, particularly in higher education curriculum development and policy making, including curatorship and quality evaluation. Currently, Peter is associate professor and projects coordinator at the School of Arts of the University of Nova Gorica where he leads New-Media and Art-Science-Technology modules in the Digital//Media Arts and Practices graduate//postgraduate programme. He has led international curriculum initiatives such as MAST – Module in Art, Science and Technology and has curated media art festivals like Pixxelpoint. 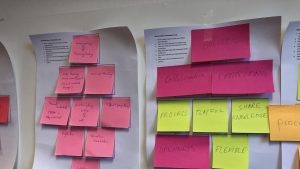